Breanne Wroughton interned at the Amani centers in Kenya and Rwanda in 2009. She now works in the Amani center in Washington, DC. Her reﬂection below highlights the impact of the recent referendum in Sudan.

A few days ago, I was very surprised to hear the sweet voice of my friend Lucy when I answered my phone. She greeted me warmly and, in classic African form, asked after my family. The last time we spoke was in 2009 when I was still in Kenya, but we slipped easily into our old friendship. She was eager to hear about my life and joked with me; she laughed as she asked, “Have you forgotten us, Breanne? Why haven’t you come back to see us here in Africa?” Our short conversation mainly entailed Lucy sharing some important news with me: her country finally had its independence!

Lucy & Mary, two of the Southern Sudanese women at Amani, sit together during a home visit[/caption] Sudan, a country ethnically and religiously divided between the north and south, recently held a referendum in which the citizens of Southern Sudan decided to secede and form their own independent state. This decision followed years of civil war in which at least 2.2 million people were killed and another 4 million Sudanese (largely in the South) were displaced.The passing of the referendum is all the more powerful when considered in context with this violent and tragic history. There is still much work ahead for Sudan. Militia groups from all sides of the conflict continue to launch attacks in politically charged areas near the informal North-South border. Official borders have yet to be drawn--a process complicated by presence of oil in the South. [caption id="" align="aligncenter" width="486"] 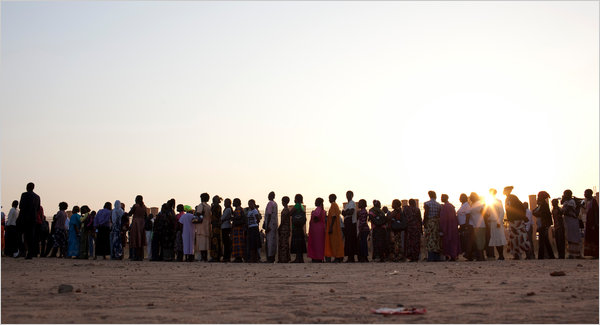 Long lines formed throughout Southern Sudan as people waited to vote in the referendum which determined whether or not Southern Sudan would become an independent nation.[/caption] As a refugee from South Sudan now living in Kenya, Lucy has spent many years away from her homeland. She has waited and prayed for peace, stability, and freedom for the place and people she loves so much. Naturally, after so many years of waiting, her voice was full of pride as she told me that the referendum passed and that she was a citizen of the newest country in the world. [caption id="" align="aligncenter" width="540"] 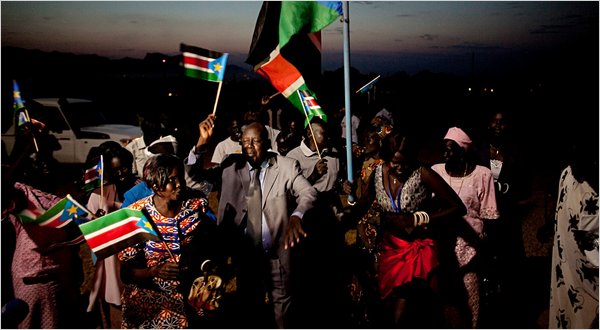 People gathered to celebrate Southern Sudan's independence[/caption] At Amani Kenya there are women from all over East and Central Africa who have fled their countries to escape poverty, unrest, political and ethnic persecution, and war. Amani seeks to be a place of peace and healing for these women amidst  injustices that affect people throughout Africa, particularly as they impact  women from the host of nationalities and ethnicities who come to Amani. In the case of Southern Sudan, we are now able to celebrate with our sisters who have long awaited the independence of their country and people. Several of the Sudanese women at Amani shared what these events mean to them and their families. Learning about their hopes and concerns for their country’s future has been a powerful reminder of the importance of health, safety, respect, stability and, above all, peace. Here are the reactions from Lucy, Mary N., and Mary W. to this historic event:   Lucy Juwa [caption id="attachment_391" align="alignleft" width="200"]

Lucy[/caption] Are you encouraged by the passing of the referendum? Yes What do you hope will be gained through Southern Sudan’s independence? Freedom, good infrastructure What are your concerns? If the government officials will work in transparency for development purposes. How has this affected you? I am independent and not being called a 2nd class citizen. Also, my husband got his job back after he lost it due to his freedom speech. He spoke out against the government he never liked. How has this affected your family members who are still in Sudan? Those who had investments and permanent residences in Khartoum had to leave without many of their possessions. What are your prayers as the situation continues to develop? Peace & Unity amongst all. Better development projects for the women as majority brew the local beer, which affects the male youths and men.   Mary Wol [caption id="attachment_401" align="alignright" width="183"]

Mary Wol[/caption] Are you encouraged by the passing of the referendum? Yes What do you hope will be gained through Southern Sudan’s independence? Freedom, many changes and better governance. What are your concerns? Proper security. How has this affected you? I am anxious about what will happen tomorrow. How has this affected your family members who are still there? They are happy, but lack food security. What are your prayers as the situation continues to develop? For good governance in South Sudan. I would like to go back and teach the ladies the skills that I have learnt here at Amani.   Mary Nyachuot [caption id="attachment_402" align="alignright" width="224"]

Mary N.[/caption] Are you encouraged by the passing of the referendum? Yes What do you hope will be gained through Southern Sudan’s independence? Peace What are your concerns? Whether or not the people of South Sudan will be able to get jobs and good development. How has this affected you? I am happy.  But it has also brought anxiety to me as I do not know what will happen next. How has this affected your family members who are still in Sudan? There is little food security. What are your prayers as the situation continues to develop? For the spirit of freedom to continue.

A Call for Justice, Peace, and Prayer